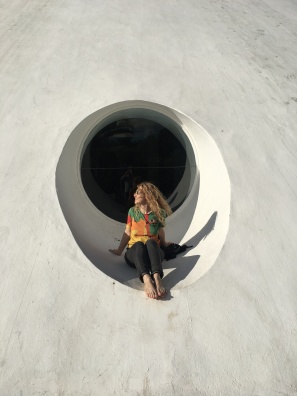 Born in Belgrade (Yugoslavia), based in New York City.

Aneta’s work is characterized by strong connection between theory and practice. Her main areas of professional interest include psychoanalysis, performance and new media studies, gender studies, decoliniality, as well as artistic and theoretical practices that affirm critical thinking at the intersection of psychoanalyses, art, culture and politics.

Currently she is a psychoanalytic candidate at the Institute for Psychoanalytic Training and Research, IPTAR in New York.

Until 2017 Aneta Stojnić held a position of an assistant professor at the Faculty of Media and Communications in Belgrade, teaching several courses at MA and PhD study programs in Transdisciplinary Humanities and Theory of Art and Media. Previously she was a postdoctoral researcher at the Academy of Fine Arts in Vienna with a project topic “Liminal Spaces and Shifting Realities in Contemporary Performance: Body, Politics, Technologies”, and Basileus postdoctoral research-fellow at Ghent University, (Belgium) Faculty of Arts and Philosophy, Research centre S:PAM (Studies in Performing Arts & Media) with the project “Politics of Body in the 21st century”. Aneta Stojnić obtained her PhD at the University of Arts in Belgrade, Interdisciplinary Studies – Theory of Art and Media, in 2013. During her PhD studies she was a visiting researcher at the Academy of Fine Arts in Vienna in 2010, 2012 and 2013 with Ernst-Mach Scholarship and the OeAd (Austrian Agency for International Cooperation in Education and Research) scholarships. She was the artist in residence at TanzQuartier Vienna in 2011, and the writer in residence at KulturKontakt Austria in 2012.

Aneta is one of the managing editors of magazine ROOM – A Sketchbook for Analytic Action.

She is also on the editorial boards of AM Journal of Art and Media Studies and INSAM Journal of Contemporary Music Art and Technology.

She regularly presents her work and research at conferences and festivals worldwide.

One thought on “About”

+
Follow a >this webpage is under (re)construction, meanwhile click on the NEWS section (up righthand corner) for the latest-ish updates< on WordPress.com