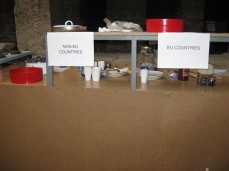 Balkan Desire is a 8 hours durational performance that consists of the following:

A part of the exhibition space is adapted as a small kitchen, including a cooker and a large pot. First, the artist performs a ritual act, during which she cleans a pile of plums removing the seeds in order to prepare them for the cooking. Then, she cooks the jam in the way it is traditionally dun in Serbia. When enough jam is ready it is announced that the artist will be serving a free dose of jam to the artists from the Eastern Europe. On the other hand, artists from EU countries will have the possibility to buy jam in a small jar – as an art piece (together with artist statement and signature), a sweet or a souvenir.

This performance questions two important issues: the position of the Eastern European – Balkan artist in the western system of art; and status of an art work/product in terms of market. Is it possible for a Balkan artist to “survive” in the western system of art if he/she does not act within the pre-established cultural model of a specific identity? The fact that the model is pre-supposed means that it is not the realistic representation of that identity. Nevertheless, it reveals the ideologically problematic position that restrains the independent political engagement of artists and motivates the politically desirable pseudo – social engagement adjusted to the demands of capital.

In the “Balkan desire” piece I perform the identity that I’m expected to show as an eastern European artist. In this way I become the Lacanian subject – my desire is the desire of the other – offering myself as a manifestation of the fantasy about Balkan (plums, jam, woman of patriarchal society “slaving over the stove”, poor artist cuing for free food…).

By making the difference between eastern and western artists – that referees to the border crossing signs EU citizens / NON EU citizens I emphasize the (ideological) injustice of such divisions as well as the unequal position of the artist from the “small nation.”

Offering the possibility to buy 1)only the jam, 2) the jam plus statement or the 3) jam with the statement and the signature of the artist (all priced differently) I provoke the cliché of three levels on which art is expected to satisfy:1) senses, 2)intellect, and 3)added value.

On the other hand, performing the action of giving and selling the jam I deal with the maters of the status of the art work and work in the art. Art work is a product, an action, concept presentation and socially-engaged activity.

Follow a >this webpage is under (re)construction, meanwhile click on the NEWS section (up righthand corner) for the latest-ish updates< on WordPress.com